Was riding my bike up to Northeast and found this cool new park, it incorporates the natural landscape into its design with tree logs, boulders and water. The water feature was my favorite, pumps are used to create a stream which children can then stomp around in! The real test will be today when I take the children to check it out.. 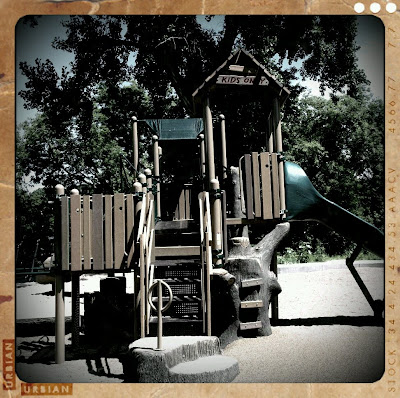 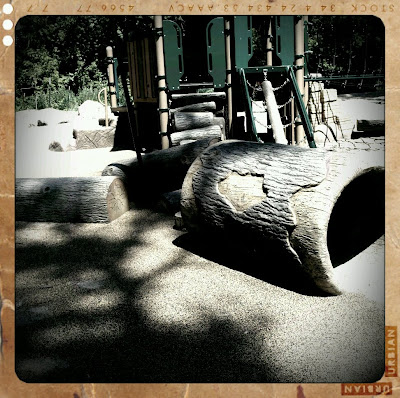 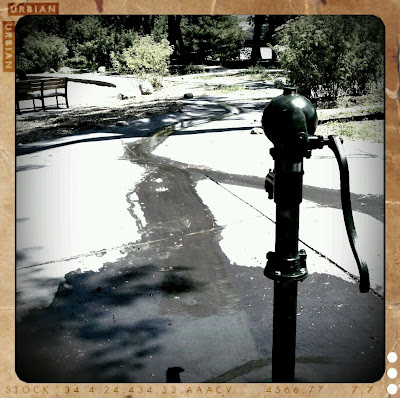 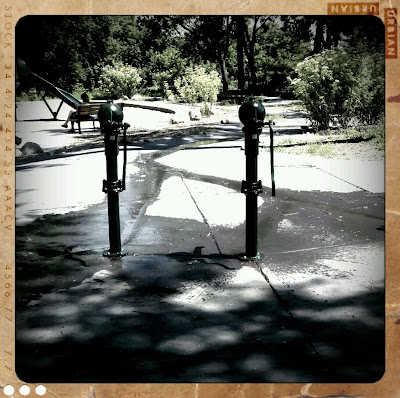 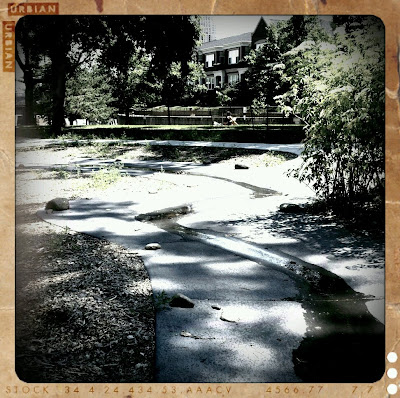 I have been in Minneapolis for 14 years.

Sorry, had to pause and take that in for a minute. Sheeesh.
When I moved here it was going to be a little jaunt to see what the city was like, explore the midwest, and then move on. I had high hopes of moving back to Philly or to head south to New Orleans for some song and dance, but somehow I got stuck. For years there has been talk of leaving, searching for the perfect place to inhabit, planning and scheming and scouring the internet. In the winter I want to move towards the warmth, in the summer I want to be near the ocean, while driving out in the corn fields I want to be near the mountains... Needless to say this train of thought can drive a girl batty!
Well, while suffering from my 'grass is always greener' malady, something curious happened. I started to look forward to that moment when the trees first show their leaves, and a soft yellowish-green washes over the dull brown of winter. I would become antsy in late winter to get into Lake Nokomis and swim. I looked forward to The Mayday Parade, The art festival in Loring Park, and winter nature walks at Woodlake. I always make a point to bike on the River road during the fall to see the many colors of trees, to feel and smell the leaves as the wind swirled around me.
At about year ten is when I realized what had happened. I liked it here. I became conscious of the rhythm of the city and felt a intrinsic pull to be a part of it. I thought it was neat how I knew when the trees would show their new leaves, and I could sense rain coming in by the color of the sky. I knew if I would show up at The Otter club around ten at night on a Friday, I was going to see some pretty good karaoke. And I love the ice cream at Sonny's best.
The tempo of this city is now within me, whether I want it or not. And after 14 years here I guess it would be reasonable to admit this is my home.

Welcome home coal.
Posted by cola at 9:13 AM No comments:

Is it really true!? 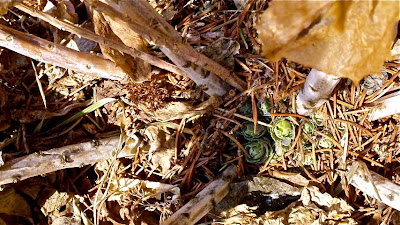 I took a walk around the garden yesterday, and low and behold, under the crusted snow and layer of leaf litter- THERE IS LIFE! I am shaking with joy!
Posted by cola at 9:22 AM No comments:

Some cool old photos I found of Powderhorn Park

My park. It is amazing how it has changed, nature is ephemeral art at its best! 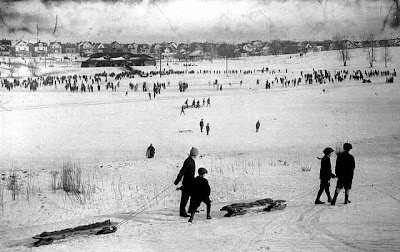 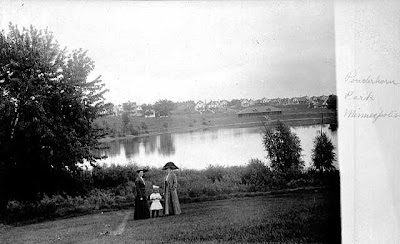 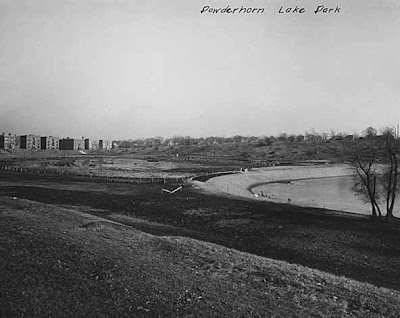 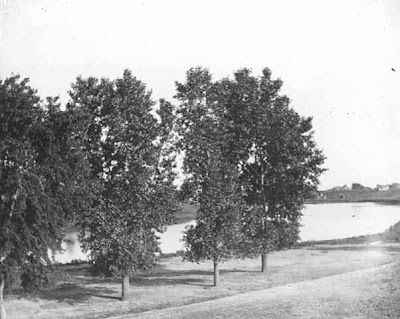 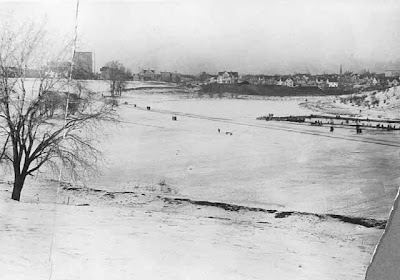 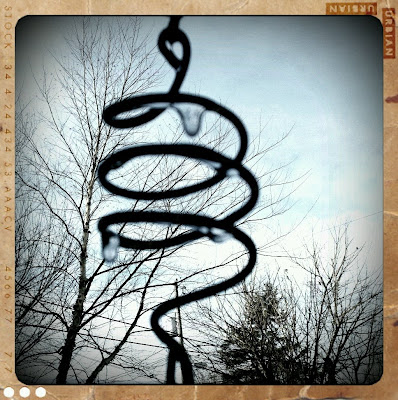 Last summer I made a series of rain chains and hung them around the yard. Yesterday I went out back and noticed how pretty they are in winter!
Posted by cola at 10:52 AM 1 comment: 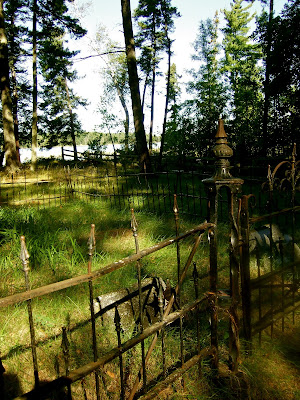 During the summer between 4th and 5th grade my family moved to an apartment outside Philadelphia. The apartment was right next to the train tracks, with a gas station on the corner, and the token cheesesteak joint on the next block. The least impressive aspect of my new home was the graveyard across the street. Needless to say I was mortified, not only was I starting a new school and beginning the task of making new friends, I was then faced with the notion that I would forever be labeled “the freak that lived next to the cemetery”! As I got older I began to appreciate the inherent beauty in that cemetery- the rolling hills, massive trees, the quietness. And I also began to think about the lives of the people buried there and the cyclical nature of life. This space enveloped me in mystery; it heightened my senses and sparks a feeling of calmness, ultimately becoming a place of peace and introspectiveness, my behavior change once I crossed the gate. Why would a park with dead people buried in it do this to me? And were these changes in my demeanor socially constructed or naturally inherent in me?
When we talk about sacred spaces we need to understand the profound cultural and religious differences we have in our society. Words like sacred or god are used as though they mean the same thing to everyone, but in contrary, every person has there own take on what spirituality is, and with that line of thought they surmise what happens in the after life. Another theory around sacred space is, of course, that it is sacred because it is interpreted as being sacred, that is to say, human beings react to that space as if it is a sacred site, and pass the behavior on.
Lakewood Cemetery is formerly an agricultural village for the Dakota people, and for them the space is sacred because of its proximity to Lake Calhoun for growing rice, as well as the landscape was conducive for ceremony. For the last century plus the space has been used for burying our dead, using elaborate rituals to preserve their memory, imbedding the idea that a sacred space can be identified by the human response to that particular place. For example, people come to put flowers on a site, light candles, place a cross near a grave, and come again and again to a site to pay tribute to it. Lakewood is beautiful, a picturesque place to spend all of eternity, but I am pretty sure the people buried there do not care; it is a place for the living. Lakewood has the soft, rolling hills, mature trees that frame your sight lines, and a mystery of who these people were, as well as who comes to visit their graves today. Maybe it is in our psyche to have physical indication of our loved ones, to solidify their existence for the generations to come. Our existence is so entangled with history; markers to define that history may help add clarity to our life.
Lakewood Cemetery is a very natural, picturesque space in an urban setting. And nature is often thought as an inherently sacred asset. So to bury our dead with an intrinsically charged space would not only define the importance of the area, it would also be a nice place to visit. The harmony of nature adds balance to our hectic life, so time set aside to honor our history in a pretty setting doesn’t sound bad!
I look at cemeteries with many biases: preconceived notions on religions, ecological implications, waste of space to name a few. But once I get past these barriers I do understand the importance that most cultures place on ceremony around the dead, and our way to immortalize people we love, honor and respect are very important to our history. Minneapolis has a rich history full of amazing people, and we are lucky to have a beautiful setting to pay tribute to them in.
Posted by cola at 5:32 AM 4 comments: 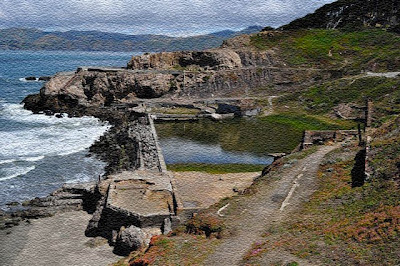 When I was 6 my parents moved my brother and I to the east coast. Till then we had lived in Sacramento where our extended family resided. We went from having aunts and uncles babysitting us, Grandma and Grandpa feeding us, and a gaggle of cousins entertaining us, to just us. The move was a big adjustment for everyone involved, but my west coast family took it very hard. They insisted my brother and I come visit every summer so the family could reconnect. It was on one of these visits I discovered a place that for the rest of my life has evoked both sentiments of my childhood as well as a reminder of our rich historical past.
In San Francisco just Southwest of Golden Gate Park, sits the ruins of Sutro Baths, a once expansive bathhouse. Built in 1896, it featured seven pools, a museum, and amphitheatre, all housed under an iron and glass roof. The Sutro Baths had a turbulent existence until it closed in 1966. In that same year a mysterious fire engulfed the baths, leaving only fragments of the glorious buildings. Today Sutro Bath Ruins is owned by the National Park Service, and is a special escape within the city with beautiful views of the Pacific Ocean.
I was thirteen the first time I visited the Sutro Baths. I remember stepping out of the car into the dirt parking lot and getting my first glimpse of the ocean crashing against the ruins. Below the lot was a deep decent down to the beach, which was littered with the decay of what looked to be a once magnificent structure. Exposed pipes cantilevered over the still water trapped within the structures. Rusty iron crumpled from fire and waves, jutted haphazardly from the wreckage, creating a frolicsome playground ready to be explored! As I was galloping down the steep cliff I stopped to gather my footings, I became aware of beyond the ruins. I took in the immenseness of the ocean; I listened to the rhythm of the waves crash on the rocks, which seemed to contradict the stillness of the space. I felt as if I were standing on the very edge of the world, between civilization and make believe.
Once down the bluff I began scuttling along the brittle pylons, jumping from one wall to the next, avoiding the cold, algae covered water below. I soon found a wall that was sturdy enough to negotiate across to the other side, where hidden in the cliffs, I caught sight of a cave. I clumsily walked across, stopping midway to look out towards the ocean and listened to the sea lions on Seal Rock gently bellowing towards their young ones, then continued on till I found solid ground. As I began to enter the cave I could start to feel the vibrations of the waves pummeling the outer edges of the cliff. The acoustics within were wondrous and eerie, amplified and rhythmically soothing. As I continued through I imagined the silhouettes of the rocks outside being chiseled away, perpetually transforming their shape. As I exited the cave I came upon monumental boulders precariously strewed along the ridge. The waters edge was not too far and I began navigated the wet rocks. Though the decent was arduous at times, I managed to scramble out to the endmost boulder, where I was surrounded by water with no one else in sight. And I felt engaged.
I have visited the Sutro Baths on many occasions, and each time I am filled with a remembrance of who I was, and who I wanted to become. It is a landscape that evolves with the natural elements, has historical ties to the past and can evoke emotional ties to my past; It is places like this I want to protect, as well as create for future generations. Today we are seeing more moves to reclaim notable landmarks and transforming them into a space that gives a nod towards the past, yet is designed for a sustainable future.
Posted by cola at 8:05 AM 2 comments: 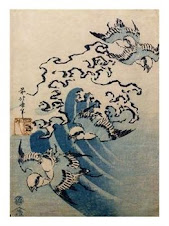 cola
Mom of two nippers, Wife to a strange and wonderful fella, Graduate student at the University of Minnesota, hoping to become a landscape architect while holding it all together- stay tuned.........